What's Behind the 'Social Solidarity' that America's Liberal Progressives Feel for Schools?

BreakAway Learning has started to grow organically in Kabul and Bo City, but as I practice our Indiegogo pitch on friends and family in the West, I’m discovering some paradoxical defensiveness about schools. And it’s making me think again about what is social solidarity, particularly in reference to the education of children.

[Parenthetically, I should say that The BreakAway Learning Project is agnostic about school attendance. We create time rotations in our learning clusters that enable teens to continue attending school if they wish, and some of them do. And while I personally think that school regimes suck up young people’s time and energies and convey a view of secondary education as a narrow college-prep corridor, I put my energies into the creation of individualized learning plans for each of our teens. I think if our product is right, teens will decide for themselves what is the best use of their time. Risk-taking and individual agency, after all, are what’s important.]

In the first place, it’s difficult to have an honest conversation about schools without coming across as teacher-bashing. Teachers have assumed a kind of ennobled victimhood in America, such that the only acceptable conversation about them is with regard to needed pay raises, better supplies, etc.

Other industries and services, from airlines to police forces to hospitals, can undergo a tough consumer scrutiny without counter-accusations that the consumer has dehumanized the flight attendant, cop, or nurse. Rather, a system is dysfunctional, and so even the noblest, most capable professional, has disappointed us. Why can’t we have that conversation about schools?

But there’s something else going on, too, and I see it paradoxically in our most affluent, highly-educated, ‘liberal progressive’ class from Alameda to Arlington. It looks like social solidarity, but remote, impersonalized, simultaneously claiming to empower identity while destroying it, celebrating tolerance of every ethos while avoiding identification with any and clearly disdaining people and communities that have one.

--Take for example Matt Damon’s support and narration of Backpack Full of Cash, a documentary funded by the teachers’ federation that criticizes the growth of privately-managed charter schools in Philadelphia, a city with an abysmal school performance record. The film lashes out against re-allocation of public funds to corporate-run schools, but never interviews

any of the students or parents that choose these alternatives. Are those families not also valued decision-makers? (Damon’s own children attend private school). Why in the area of education, particularly, do wealthy people feel so passionate about collective decision-making on behalf of lower-income people, whom they simultaneously lionize and patronize?

--Liberal progressives are hilariously schizophrenic in their love of children, too. They seem to advocate for children more strenuously in the abstract than in the publicly tantruming, snot-dribbling, stick-swinging, sibling-fighting, quick-witted, sarcastic, smart-ass concrete. As one who started having kids when I was still a student, I have advanced from the pity of affluent, middle-aged Georgetown mums (I studied at Montrose Park with #1 in Goodwill front-pack), to frowns and jabs on airplanes as our brood multiplied, to the age-old “helpful” remarks of the sister-feminist at shopping-center-meltdowns (pregnant with #5), You’ve heard of contraception, right? Indeed! It is from the ranks of these abstract, cerebral lovers-of-children, that we seem to hear more self-certain views about how they should be educated and raised, than from the puke-spattered, war-weary parents of actual kids.

--Perhaps the liberal-progressive skepticism toward alternative-education reveals that the core of their mutated-liberalism is not the individual at all (sorry, John Locke), but the collective. Dana Goldstein warns her ideological peers, “Liberals, Don’t Homeschool Your Kids” in Slate, “Could such a go-it-alone ideology ever be truly progressive--by which I mean, does homeschooling serve the interests not just of those who are doing it, but of society as a whole?” Wouldn’t a Jeffersonian liberal have held that it is indeed the mosaic of individual decision-making within a limited state that is conducive to, well, life, liberty and some kind of happiness?

--As schools, particularly secondary schools, are not just about literacy and numeracy, but are the incubators of children’s worldviews, I’m startled by the daily deference to an untransparent machinery whose cues and lexicon signal what are acceptable and unacceptable norms. During our first son’s enrollment at a Falls Church public school, we attended a tomahawk-making party on December 22nd. Our second son now studies film at Interlochen Arts Academy in Michigan, where 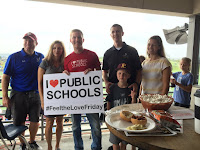 there is a Feminist Club, a Jewish Club, and an African-American Club, and where one unhyphenated prom was followed by Queer-Prom. The absent identifications speak louder than the named ones. Interlochen recently launched a “Community of Care” project to “directly address campus climate issues that leave students feeling marginalized; to promote the identification and sharing of best practices that promote diversity and equity”; the project involves the selective removal and replacement of facilities staff along hard-to-define parameters, seeking, “staff who have increased experience working with diverse populations and demonstrate high levels of cultural competency”. It is just this well-intentioned-seeming social-engineering that may cost a very competent Upper-Peninsula-born landscaper his job this semester, while sending subtle signals to my 16-year old son about what is valued and what is not.


I’m learning a few things about the American elite’s school solidarity these days, like a foreign film you should tell your friends you really enjoyed. It’s a signal that says “I’m diverse and tolerant and open-minded.” The truth that schools are zip-code specific, that real financial choice is out of reach of most families, that some of the most vocal advocates have personally mixed feelings about children, that schools grind individuality out of children, that their emerging expression is preempted by an elaborate signaling of acceptable language and thought, is not discussed at the backyard wine-and-cheese of this cohort. To acknowledge this reality is to stare, slack-jawed and belly-button-scratching at the foreign film and say “Huh?”

Clearly, I have a long way to go in refining my pitch for crowd-funding for BreakAway Learning among the group of Americans with the most financial capability to make a difference. Perhaps if the students in Kabul and Bo City, like Damon’s subjects in Philadelphia or my baby-hauling student self, look pitiful and poor enough, American funders will rally around a good cause. Little will they suspect that these teens are charging forward, becoming masters of coding and artificial intelligence, multi-lingual biochemists, writers and entrepreneurs. Individually and unapologetically, they will outstrip their American peers. Just watch! [And while you're at it, check us out on Indiegogo at https://www.indiegogo.com/projects/breakaway-learning-project-kabul-kids/coming_soon/picahttps://www.indiegogo.com/projects/breakaway-learning-project-kabul-kids/coming_soon/pica ]
Posted by Colleen Mascenik at 2:05 PM